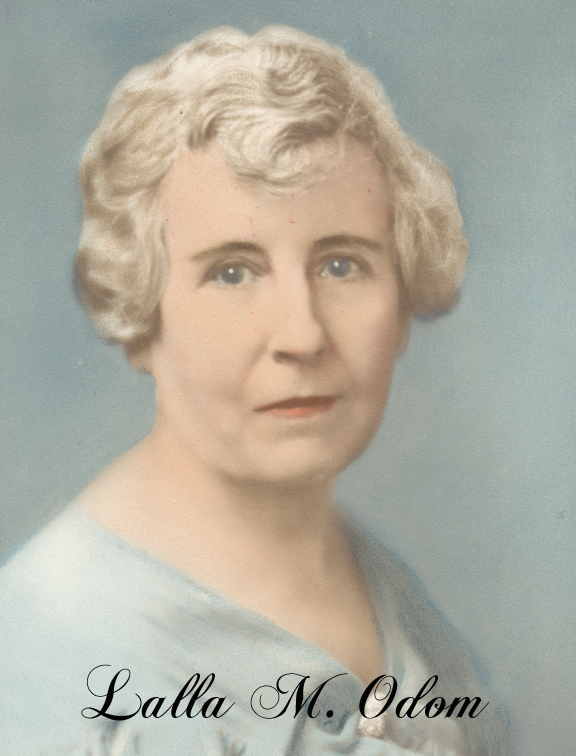 Mrs. Lalla M. Odom taught during a time of great change in America. Women could vote, the performing arts in Harlem were blossoming, and prohibition was in full swing. People were moving off the farms to become middle-class city dwellers. People had more spending money than ever before. New inventions like automobiles and electricity were changing the way people worked and played.

Children, especially, found their way of life was changing. The practice of child labor was being replaced by widespread public education. The public wanted to see children working in schools instead of factories and farms. Many states began to pass compulsory school attendance laws. Some children welcomed the change because factory life was often brutal. The lives of these children were short but filled with hard work, illiteracy, and sickness. These children welcomed schooling and the opportunities literacy could bring. Luckier children born into conditions where they did not have to work from sunrise to sunset may have felt more like Huckleberry Finn. They saw compulsory education as an end to freedom. But, like it or not, the change was here to stay for all children.

With the sudden need for teachers, there was a huge labor shortage. Few men were interested in applying for the new teaching positions; they wanted the jobs they held before the first World War. The young men who fought during World War I were sometimes called 'the lost generation.' They had seen too much horror during the war and had lost too many friends. They had had enough change; they longed for a return to normalcy. They wanted a return to the way things used to be. There could be no easy return to the old ways, though. When the soldiers returned, many women happily gave up their jobs so the soldiers could try to return to a normal life. There was a problem, though. So many young men had died that few women could hope to marry. Many young women needed a means to survive. If they could not rely on others, they would have to be independent. Women had proved their worth in the workforce during the Great War. Many women had even welcomed some of the changes. They had enjoyed being wage-earners. They wished to continue to earn spending money and work outside the home. Many of these women took advantage of the new need for teachers. Like Mrs. Odom, they attended teacher preparation colleges and became educators. The pay was poor and the working conditions tough; however, as bills mounted up, the prospect of unemployment seemed far worse. They stuck with their jobs.

Teachers had more to deal with than hard work and poor pay, though. They also had to contend with public opinion. Mrs. Odom was alive during the time of the 'flapper.' Flappers were women who flaunted independence. Like the young men of the lost generation, they felt despair for a world that had just experienced the worst war ever. One way they expressed their feelings was through the fashions of the time. Girls started wearing make-up, short hair, and short skirts. They loved going to night clubs to dance the night away and perhaps forget their troubles. Everyone began talking about the flappers and their way of life. People did not know if they liked the changes happening around them.

The flapper lifestyle was a stark contrast to the chaste and serene style of the Gibson-girl look that had been popular prior to the war. Women who wished to work outside the home were considered a bit too daring by some. Some people were not comfortable with all the changes happening to society. They were scared. They worried about who was going to take care of their children. Were children all across America going to be taught by wild women who had no respect for tradition? Many new teachers were treated with suspicion. Female teachers frequently had to sign contracts that stipulated not only the kinds of clothing they could wear but how many gentlemen callers they could receive. In many states, teachers could be dismissed for joining a union, working on a school board election, or even getting married.

Mrs. Odom became famous in Austin for taking issue with the rule against married teachers. Married teachers could certainly perform their jobs as well as un-married teachers. Being married ought not disqualify a person from earning a living. When times changed even more during the 30s, and mass unemployment resulted, opportunities for anyone to work became crucial. Mrs. Odom's stand against discrimination brought about the reversal of the ruling against married teachers in Austin. She expressed herself well, frequently taking issue with any attempt to downgrade teachers and education. 1 Mrs. Odom wanted people to be treated with respect so she changed an unfair rule with hard work, determination, and skill.

Mrs. Odom also became famous in Austin for her excellence in math instruction. She was such a beloved teacher that people decided her contributions to education needed to be remembered. The Delta Kappa Gamma Society still offers a scholarship in Lalla M. Odom's name at Texas Woman's University. The Delta Kappa Gamma Society was formed in 1929 at the University of Texas. Lalla Odom was one of the twelve founding members. The goal of the society is to promote the professional and personal growth of women educators and excellence in education. Mrs. Lalla Odom may have lived a long time ago but her life's work continues to make an impact today. Mrs. Odom was one of those special people who helped make this world a better place. She was willing to work hard. She had courage and spoke with skill and common sense. We are proud that our school remembers and honors Mrs. Lalla M. Odom.